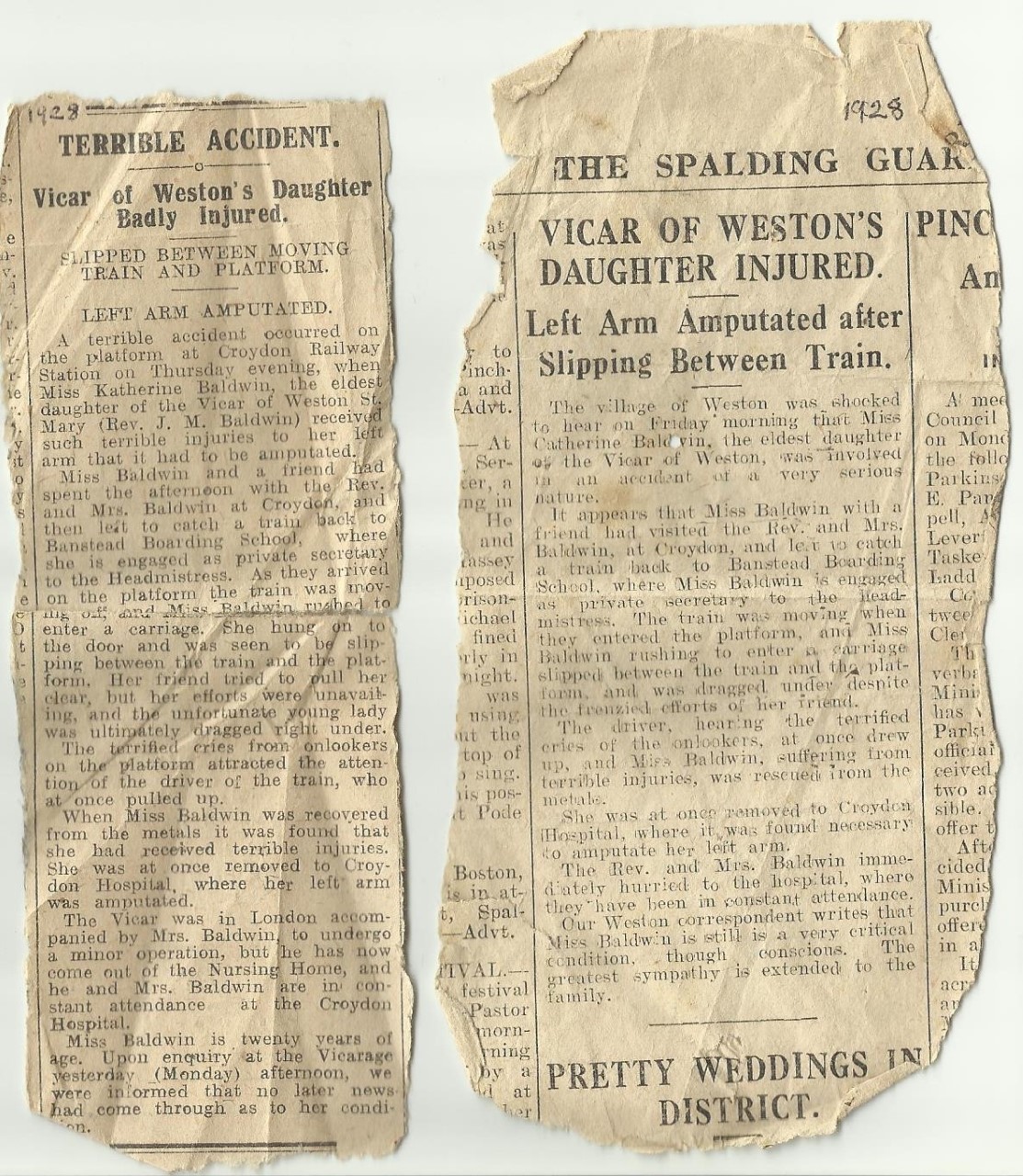 With the RMT strike coming up on 22 February, Lynne Armstrong, née Baldwin, sent us the attached press clipping from 1928 about an accident that happened to her aunt at Croydon Station, “when there were no guards on the platforms”, adding, “It was accidents like that which led to the introduction of guards.”

I know this is easily dismissed; after all, it happened in 1928 and the Rail Safety and Standards Board have since found that driver-only operated trains are just as safe as those with guards.

But while Britain’s railways are the safest in Europe, 80% of all accidents since 2011 happened on DOO-trains.

This is a government that seems comfortable with a rise of 30,000 deaths a year due to social care cuts; over 2,000 deaths of chronically ill and disabled people following a command to return to work; and an NHS going through an absolutely horrendous winter in the total absence of any actual winter conditions.

Southern’s abysmal service was rewarded with a new contract, instead of with the removal of the franchise as the public both wanted and expected – a new contract that allowed them to cancel 32,000 trains every year so they didn’t appear to be failing their contract.

The only way to prevent this is to prevent it – to stand in solidarity with the RMT unions, against the driver-only trains, where drivers will be the sole member of staff to both drive the train and deal with on-board harassment, disruptive passengers, violence, illness, collisions at a crossing, suicides on the line, fire on the train, un-staffed platforms, etc.

Please join us in showing your support for the strike against driver-only operated trains on 22 February 2017 by contacting Southern Rail or your local MP and letting them know where you stand.

The full transcript of the news clippings is as follows:

SLIPPED BETWEEN MOVING TRAIN AND PLATFORM

A terrible accident occurred on the platform at Croydon Railway Station on Thursday evening, when Miss Katherine Baldwin, the eldest daughter of the Vicar of Weston St Mary (Rev. J. M. Baldwin) received such terrible injuries to her left arm that it had to be amputated.

Miss Baldwin and a friend had spent the afternoon with the Rev. and Mrs Baldwin at Croydon, and then left to catch a train back to Banstead Boarding School, where she is engaged as private secretary to the Headmistress. As they arrived at the platform the train was moving off, and Miss Baldwin rushed to enter a carriage. She hung on to the door and was seen to be slipping between the train and the platform. Her friend tried to pull her clear but her efforts were unavailing, and the unfortunate young lady was dragged right under.

The terrified cries from onlookers on the platform attracted the attention of the driver of the train, who at once pulled up.

When Miss Baldwin was pulled from the metals it was found that she had received terrible injuries. She was at once removed to Croydon Hospital, where her left arm was amputated.

The Vicar was in London accompanied by Mrs Baldwin, to undergo a minor operation, but he has now come out of the Nursing Home, and he and Mrs Baldwin are in constant attendance at the Croydon Hospital.

Miss Baldwin is of twenty years of age. Upon enquiry at the Vicarage yesterday (Monday) afternoon, we were informed that no later news had come through as to her condition.

The village of Weston was shocked to hear on Friday morning that Miss Catherine Baldwin, the eldest daughter of the Vicar of Weston, was involved in an accident of a very serious nature.

It appears that Miss Baldwin with a friend had visited the Vicar and Mrs Baldwin, at Croydon, and left to catch a train back to Banstead Boarding School, where Miss Baldwin is engaged as private secretary to the headmistress. The train was moving when they entered the platform, and Miss Baldwin rushing to enter a carriage slipped between the train and the platform, and was dragged under despite the frenzied efforts of her friend.

The driver, hearing the terrified cries of the onlookers, at once drew up, and Miss Baldwin, suffering from terrible injuries, was rescued from the metals.

She was at once removed to Croydon Hospital, where it was found necessary to remove her left arm.

The Rev. and Mrs Baldwin at once hurried to the hospital, where they have been in constant attendance.

Our Weston correspondent writes that Miss Baldwin is still in a very critical condition, though conscious. The greatest sympathy is extended to the family.